The Importance of Growing Meadows in Riverview

I think most Riverview residents would agree that we live in the best neighbourhood in Winnipeg. It has interesting and diverse homes. It is close to shops, restaurants and services, schools, bus routes, extensive park land and it has easy access to downtown. Being a peninsula, bounded by the Red River, it is quiet with mainly local traffic.

It is a truly great place to live, until you consider its lack of biodiversity. In the warm seasons, Riverview, like too many neighbourhoods is, in large part, an expanse of monoculture lawns. Walking my dog through the neighbourhood, it is evident that there are far too many lawns and too few indigenous plants to support an ecosystem. Lawns are regularly subjected to weed and pest control measures, watered to maintain a green colour and regularly mowed, often with gas mowers, to guarantee an acceptable blade length. Lawns are historical, dating back to the sixteenth century when they were a status symbol for aristocracy. Over the years, lawns have become the norm and alternatives are often not considered.

There are many negatives to perpetuating lawns. Most importantly, they disconnect humans from nature to the point that they are a significant threat to human survival. As a monoculture, they are a wasteland devoid of biodiversity. They cause a huge imbalance in the food-web — the natural interconnection of “what-eats-what” in an ecological community. In short: lawns pose a serious threat to humans by their lack of contributions to insects and animals. 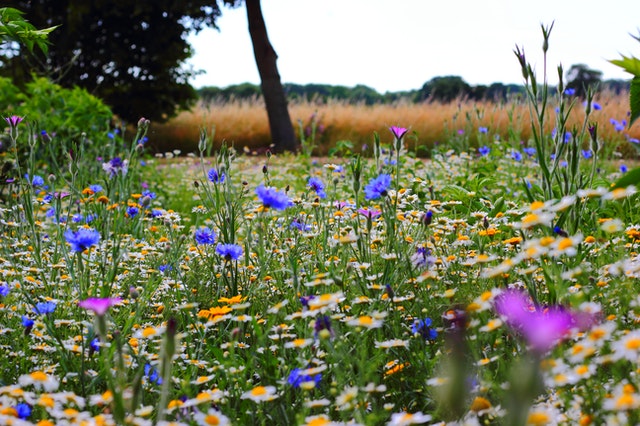 The planet is losing insect and bird species at an alarming rate. In the last 50 years, the bird population in North America has decreased by nearly three billion. Recent statistics show that insect populations have fallen by 45% in the last four decades — the same period of time in which human population doubled. One third of the remaining insect population is threatened by extinction. This rate of extinction is 8 times faster than that for mammals and birds. The total mass of insects is falling by 2.5% per year. These statistics need to be a wake-up call to everyone on this planet. Insects are vital to human survival. Humans have to stop their antagonistic relationship with insects and understand that without them, human existence will cease. One entomologist recently put it in perspective: The world’s insects are hurtling down the path to extinction, threatening a catastrophic collapse of nature’s ecosystems.

In the last hundred years, urbanization has transformed native landscape into areas predominantly used for housing. In the US, statistics indicate that 150 million acres of natural habitat has been lost to urban sprawl. Of that sprawl, some 40 million acres of native habitat have been lost. This human-dominated landscape does not support functioning ecosystems and what is currently left in its natural state, is too small to solely support wildlife.

In an attempt to deal with the devastating loss of habitat and associated ecosystems, we, as residential owners of Riverview properties, can look at small ways to defend against the depletion. In place of lawns, we can restore native plant habitat that will preserve biodiversity. Native plants are those that have evolved in a region and are the ecological basis on which life in that region, depends. Without native plants, insects that co-evolved with these plants, cannot survive. And, native birds cannot survive without insects. It is not a matter of simply planting flowers. Most of the landscape plants sold in Winnipeg nurseries are alien species originating from foreign countries. They look very lovely in our Winnipeg yards, but Insects are host-specific and do not recognize these exotics as food. Butterflies and moths depend on specific native plants for survival. An example commonly used is the Monarch butterfly which can only eat and breed on Milkweed plants. There is no alternative. Without Milkweed, the Monarch dies. Insect herbivores can only eat and digest plants with which they have co-evolved. If insects cannot find native plants to feed on, they die and birds then have fewer insects to eat and will, in turn, decline or die out. One example of birds’ relationship to insects is the chickadee, common in our Riverview neighbourhood. It takes between 6,000 and 9,000 caterpillars to raise a clutch of baby chickadees. We forget sometimes how significant bees and other pollinators are to human life. Without pollinators, there would be no edible plants for human consumption.

Landscaping choices have major effects on bird and insect populations. Homeowners can assist wildlife by selecting native plant species to grow in their gardens. Besides providing nectar for pollinators such as bees, hummingbirds, butterflies and moths, native plants provide shelter for wildlife and some provide berries, fruits and seeds for birds.

Native plants are easy to care for, requiring little or no maintenance. Once planted, very little has to be done to care for them. As long as they are mulched, they require little or no water other than rain fall. They provide some benefit in addressing climate change by sequestering carbon in the ground.

All animals get their food from plants, either directly or by eating something that ate a plant. By growing native plants we bring diversity into our gardens and establish a food-web. It is not necessary to eliminate lawns altogether. Having a meadow area of native plants along with lawn and exotic plants will allow the homeowner to enjoy a diverse landscape. So long as this is done in a sustainable way, without the use of pesticides and herbicides, this can provide a habitat that is part of a collective effort to nurture and sustain wildlife.

Here is a short list of suggested indigenous plants:Black-eyed Susan

Elizabeth Sellors has been a resident of Riverview for forty years. She is a Master Gardener and Arborist.